No One Can Tell: On the Divine Style of Meher Baba 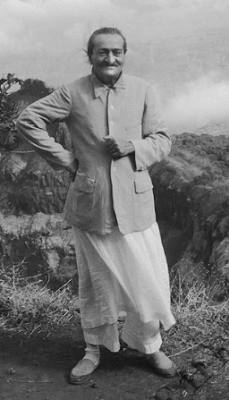 Divinity is not devoid of humanity. Spirituality must make man more human. It is a positive attitude of releasing all that is good, noble and beautiful in man. It also contributes to all that is gracious and lovely in the environment.
– Meher Baba 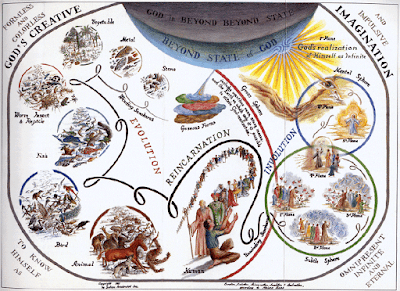 I doubt whether that experience can be expressed in words. I had heard about him, but I remained skeptical . . . I entered the room in which Baba was sitting surrounded by followers and disciples. That very moment, an experience began, full of wonder and beauty. Suddenly I had to run across the room and I found myself weeping on the floor at his feet. Weeping, weeping! Oh, how I was weeping! But I also began to laugh, and the streams running down my cheeks and the outbursts of laughter became one. I was resting my head on Baba’s hand, and my whole body was shaking with terrific sobs of liberation. Eventually, I quieted down. Baba then took my face between his hands and looked at me for a long time into one of my eyes, and then into the other, and then back into the first eye. Then he spoke to me via the alphabet board. His first words were: “I am man and woman and child. I am sexless.” He then paused for a while, brought his face nearer to mine and spelled out, “Have no fear.”[53]

Jean Adriel recalls Norina’s transformation: “Something extraordinary had apparently happened to her since I had last seen her . . . She then told me that ever since the moment Baba’s feet had touched the shores of America she had done nothing but weep. She had been compelled to cancel all of her social engagements. The old hauteur of sophistication was replaced by child-like wonder.”[54]
The path of Norina’s life is itself an incredible crisscross of glamour and spirituality, a miracle on the threshold of divine silence well worth lingering over. A silent film actress (a.k.a. Maria Carmi) renowned for performing the Virgin Mary as a statue come to life in Max Reinhardt’s spectacular production of her first husband Karl Vollmöller’s The Miracle (1911), her spiritual-aristocratic beauty lent mystique to the perfume company whose iconic bottle she designed and later, after the death of Prince Georges in 1935, “spontaneously gave her share [of] to Baba.”[55] 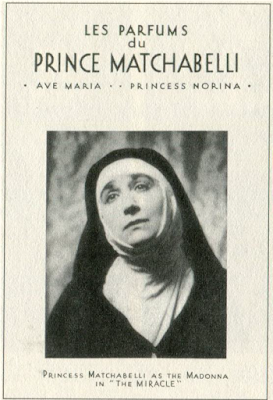 Posted by Nicola Masciandaro at 3:29 PM No comments: Links to this post