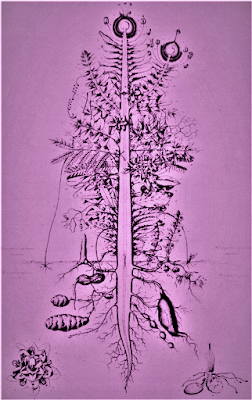 The tree which moves some to tears of joy is in the Eyes of others only a Green thing that stands in the way . . . to the Eyes of the Man of Imagination Nature is Imagination itself.
– William Blake
Inside the horizon of every line, green is looking for green. The eye of eye is green. Closing my eyes, I gaze out looking for you through myself, and I grow green. Greenness of the eye of the heart.

It is not a simple thing to think this greenness. The matter of color is so mysteriously specific, an appearance stronger than its own fact. How to grasp green without following thinking into falling for seeing it as color of, without losing its real quality among the vines of association? It is a question of understanding greenness according to its own literality, of reading it like a letter, of spelling it like a word.

This one may do by staying with the hyperliterality and non-arbitrariness of Blake’s image, its itself-ness. Here, where truth is seen right on the surface, the tree is not simply an example of nature as imagination, but its very likeness, its species. Nature is a green thing that stands in the way because imagination is green. Thus we approach inversely a properly intellectual vision, that which “touches on things which do not have any images that are like them without actually being what they are.”[2] Such hyperliteral seeing may be conceived as a vision through no one, via the deep-flat immediacy of a paradoxically questioning presence ‘who’ apparently already understands, as per Augustine’s well-known reflection on time: “What is time? If no one [nemo] asks of me, I know; if I want to explain it to someone asking, I do not know.”[3] This nemo (from ne + homo) is the inhumanity of a too-close vision that touches, plant-like, what it cannot see precisely by simply seeing it. It is an order of understanding requiring precisely that no one ask the question, a non-asking asker ‘who’ is the presence of imagination itself, its species. So we find in Michael Marder’s fortuitous formulation of our blindness to plant intelligence the perfect corollary to Blake’s tree of imagination: “Imagine a being capable of processing, remembering, and sharing information—a being with potentialities proper to it and a world of its own . . . most of us will think of a human person, some will associate it with an animal, and virtually no one’s imagination will conjure up a plant.”[4]

Species: image-growth of the entity, face of an essence, appearance of true self-imitation—the spice of being. Image (from the root *aim- ‘copy’) and greenness (from the root *ghre- ‘grow’) converge in the auto-mimetic nature of growth. Thus Goethe begins The Metamorphosis of Plants: “Anyone who has paid even a little attention to plant growth will readily see that certain external parts of the plant undergo frequent change and take on the shape of the adjacent parts—sometimes fully, sometimes more, and sometimes less.”[5] Green is the species of imagination, its spice. Imagination tastes green.[6]

To observe more clearly the verdant idea of the image, consider Augustine’s description of the three levels of vision (corporeal, imaginal, intellectual) as a picture of plant-like growth: “When you read, You shall love your neighbor as yourself (Mark 12:31), three kinds of vision take place: one with the eyes, when you see the actual letters; another with the human spirit, by which you think of your neighbor even though he is not there; a third with the attention of the mind, by which you understand and look at love itself.”[7] Vision greens, sprouting forth in three unified orders not unlike the form of a plant. Corporeal, objective vision, that which sees surface or what cannot be seen through, touches the image as leaf. Imaginal, mediated vision, that which sees transparently via the subtle lines seen by seeing through, touches the image as stem. Intellectual, immediate vision, that which sees the very form of the seen, neither without seeing through it nor with seeing through it (or both), in other words seeing the thing directly through itself, touches the image as root.

Once again the specific example—the second part of love’s ‘double law’[8]—is more than example, being specularly paradigmatic of vision as the movement and manifestation of will. The love seen in seeing love mirrors and is mirrored by love’s seeing per se. Likewise, the three levels of vision are themselves conceptually evident in the conspicuous text: in the objective fact of the neighbor (from the root *bheue- ‘to be, exist, grow’) or one who dwells near (plēsion, proximus), in the meditating fact of the likeness (from the root *lik- ‘body, form; like, same’) between oneself and neighbor, and in the immediate fact of self-love.[9] The neighborliness of seeing reflects vision as a force occurring through the mirror of love, via the first unseen image of itself—like the gap between conatus and connatus, twixt one’s inborn gravity for oneself and the non-autonomous withness of one’s birth.[10]

The unitary, divine fact of love—“Love is the reflection of God’s unity in the world of duality. It constitutes the entire significance of creation”[11]—is imaginally present through the law of love in plant form. Seen in this way, in the moment of Augustine’s picking of this example, the three-fold order of vision becomes a revelation of the second commandment as graft of the first. As image grows mimetically via the cut-and-splice process of self-copying into the very synthesis of vision that sees a thing all at once in gross, subtle, and mental dimension, so does the image’s verdant structure here expose the second part of love’s double law as a cutting of love itself, the living image of the will to love the One as love. “I am the vine, you are the branches” (John 15:5).

And in the original articulation of the first commandment, we see a similar representation of the various levels of being synthesized by the power of a unifying force: “you shall love the Lord your God with all your heart, and with all your soul, and with all your mind, and with all your strength” (Mark 12:30). Likewise, Dante’s account of the double necessity of love of self and love of God conspicuously deploys the locution of cutting (division, decision) to express the indivisibility of amorous vision: “Or, perché mai non può da la salute / amor del suo subietto volger viso, / da l’odio proprio son le cose tute; / e perché intender non si può diviso, / e per sé stante, alcuno esser dal primo, / da quello odiare ogne effetto è deciso” (Purgatorio 17.106-11).[12] Impossibility of self-hatred is the identical, unquestionable twin of severance from hating God.[13]

Love as the rhyme (from root *sreu- ‘to flow’) flowing between sight and color: “No white nor red was ever seen / So am’rous as this lovely green.”[14] Love as greenness of beauty’s eye, of the image that sees, seizing one by its look, the color of the species as flower of imagination: “The plant that achieves only stunted flowers in the relentless struggle for existence, having been released from this struggle by a stroke of good fortune, suddenly looks at us with the eye of beauty.”[15] Or as Meister Eckhart says, also with respect to the extrahumanity of vision, “All creatures are green in God.”[16] Being the alterative of pink or rose, the generic red-cum-white of living beauty and non-spectral color perceived as if between the high and low ends of the rainbow (white light minus green equals pink),[17] green is the presence of the absence of the spectrum’s unity within itself, the index of the will that curves it into infinity.

The self/world-annihilative power of love’s vision—“Annihilating all that’s made / To a green thought in a green shade”[18]—concerns an absolute and unendurable interfaciality, the divine revelation of universe as mirror. At the intolerable summit of Narcissus’s specular torture, finally liquifying in the fire of love—“sic attentuatus amore / liquitur et tecto paullatim carpitur igni”[19]—the lover surrenders into the green to become a flower: “ille caput viridi fessum submisit in herba, / lumina mors clausit domini mirantia formam” [he laid down his weary head in the green grass and death closed the bright eyes marveling upon their master’s beauty].[20] In the end everyone follows their heart, dies into the reality behind beauty’s dream. As Klima writes in Glorious Nemesis, “But what the mind does not believe, the heart does. And in the end the intellect does, too; what else is left for it to do?”[21]

Green is the color of man’s most properly eyeless neighbor—the manifest appearance of vision as a naturally missing power: “We speak of privation . . . if something has not one of the attributes which a thing might naturally have, even if this thing itself would not naturally have it, e.g. a plant is said to be deprived of eyes.”[22] Being somewhere in the middle of the rainbow, in the midst of the spectrum visible to humans, green reflects the heart as the omnipresent medium or general line of being: “my heart, where I am whoever/whatever I am.”[23] It is the spectral aura of the ghostly eros of all things, their being ( )here in all the creaturely fullness of uncircumscribable restlessness and indeterminacy: “For you have made us for yourself, and our heart is restless until it rests in you.”[24] So in the impressional order of experience, green corresponds to the intensity of longing: “All thoughts, words and acts cause sanskaras or impressions on one’s mind. Sanskaras are of seven different colors, the same as those of a rainbow . . . Intense spiritual longing gives rise to sanskaras of the green color. Just as red sanskaras are the worst, so the green ones are the best.”[25] As if seeing with eyes one naturally misses, longing grows through the distance of its own missingness towards the presence of what would only be missed more were it present.[26]

“Seek his face always [Psalm 104.4], let not the finding of the beloved put an end to the love-inspired search; but as love grows, so let the search for the one already found become more intense.”[27] The search that never ends is green—the looking of imagination itself or that which stands everywhere in the middle with an eye for the whole. The gravity of green corresponds to the color spectrum’s vital center, a location at once for the above and of the below. So is the weight of every image double. Image, forever undecidably inside and outside the eye, looks simultaneously into and beyond one’s vision. Seeing no one, lacking the eyes whereby it sees, the green life of imagination searches through every face, growing beyond all someone ever seen.

As the radically individual fact of one’s human form gives too-literal witness to its being envisioned by one without eyes to see it,[28] so does the green reality of imagination, this actual reflection of our missing eyes, lure one to outgrow the fantasy of identity and rest in the limitlessness of a will freer than one’s own—that most ancient love alone capable of creating the unimaginably new.

Posted by Nicola Masciandaro at 11:32 PM No comments: