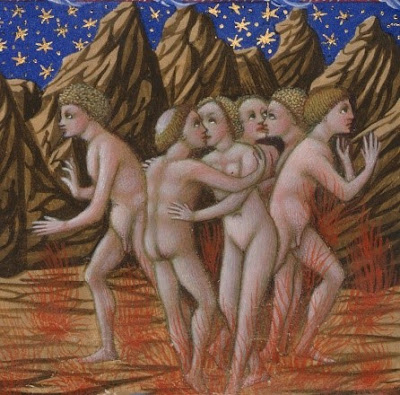 Do not be conformed to this world, but be transformed by the renewing of your minds.
– Romans 12:2

Let despair and disappointment ravage and destroy the garden of your life;
Beautify it once again by the seedlings of contentment and self-sufficiency.
– Song of the New Life

Poi s’ascose nel foco che li affina. [Then he hid himself in the fire that refines them]
– Dante, Purgatorio 26.148

A common medieval figure for divine union—that of the iron in the fire—will provide the model for this three-part seminar on mystical becoming and the question of culture. Essential to the logic of this figure is the paradoxical power of the iron, representative of the individual or soul, to remain itself in the midst of becoming fire-like, to be transformed precisely through its capacity to resist or withstand the power that alters it. In this sense, the properly mystical or hidden nature of the iron lies, not in conforming to, but in renewing itself in the fire by intensively not being it, by hiding more and more the depth of its originally black metal substance and thereby becoming transformed into something at once thoroughly different from and ever more purely itself. This paradox suggests a crucial relevance to the issue of cultural becoming and the ongoing conflicts between traditionalisms and modernisms, between the forces that would bind the present to past forms and those that would sever the present from them, insofar as both fail to fulfill the paradoxical process of authentic transformation whereby something acquires a truly new nature by preserving at all costs its individual essence, even to the point, as Richard of St. Victor says, of “resist[ing] the omnipotent” (Four Degrees of Violent Love). Accordingly, this seminar will trace the contours of mystical becoming while keeping an eye open at each stage for their present cultural and occultural implications, the hidden dimensions of inner resistance and negation which hold the key to true renewal. Pairing medieval texts with select discourses by Meher Baba touching on the future of humanity, we will hide the question of culture in the fire of mysticism in order to see and not see what emerges.

Day I: Black—Sorrow and Self-Negation

Extras: “Sorrow of Being: In Calignem” and “The Tears of Matter: On the Crucifixion Darkness,” On the Darkness of the Will (Mimesis, 2018). “Secret: No Light Has Ever Seen the Black Universe, Dark Knights of the Universe (NAME, 2013).

Day II: Glowing—Desire and Movement
Readings:        Richard of St. Victor, On the Four Degrees of Violent Love.
Thomas of Cantimpré, Life of Christina the Astonishing.
Meher Baba, “The Life of the Spirit,” Discourses.

Extras: “Firebox,” in Black Hyperbox (Punch, 2017). “Nietzsche’s Amor Fati: Wishing and Willing in a Cybernetic Circuit,” in Digital Dionysius: Nietzsche and the Network-Centric Condition (punctum, 2016). “Because It’s Not There: A Vision of Climbing and Life,” in On the Darkness of the Will (Mimesis, 2018).

Day III: Liquid—Union and the Now

Posted by Nicola Masciandaro at 11:32 AM No comments: